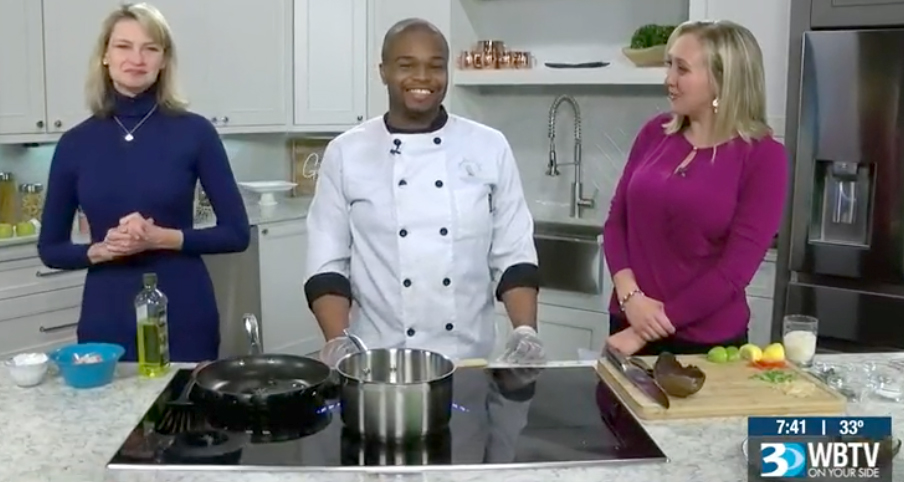 Congratulations to Jordan Walker, a 2019 Livingstone College Culinary Arts and Hospitality Management graduate, on his Feb. 29 appearance on WBTV for a cooking segment, where he prepared a shrimp coconut rice bowl. Click on link above to watch segment.

If it wasn’t for the white chef jacket, his mad skills in the kitchen would be unassuming.

Jordan Walker portrayed a typical student while at Livingstone College, one who shared the same highs and woes of such. But when he spoke culinary, his distinction and passion for food spilled out like a poached egg.

The December 2019 graduate earned his bachelor’s degree in hospitality management and his associate’s degree in culinary arts from the Livingstone College School of Hospitality Management and Culinary Arts. He was a member of the second class of the college’s culinary arts program, which began in 2012 in the former Holiday Inn at 530 Jake Alexander Blvd. South.

So what has Walker been up to since graduation? Glad you asked.

Last month, Walker made his TV debut as a guest chef on Charlotte’s WBTV On Your Side, where he dished up a shrimp coconut rice bowl.

In a Facebook post, he wrote that since he was a little boy, he always dreamed of being on TV, where thousands, if not millions of people, could see him. “Today, I had that opportunity to showcase my talents in a place it could be appreciated.”

He said the opportunity came to him through his current employer, Divine Appetit of Concord, where he is sous-chef. He’s worked there since December.

There was one glitch during the TV segment in which the stove did not work properly – no fault of his – and Walker breezed through it like a professional. Fortunately for him, he brought a cooked version of his entrée with him to the studio.

The response has been overwhelming for Walker, whose infectious smile has grown wider.

“Everybody has been sharing it. It really, in my opinion, went viral,” he said of the post of his TV appearance. (View the segment at this link: https://www.wbtv.com/video/2020/02/29/chef-jordan-walker/.) It has 4,000 views and 97 shares on his personal Facebook page alone.

He’s also gotten some catering jobs from the exposure, and is considering a YouTube channel.

Walker is thankful for D’Andrea Lawson, executive chef at Divine Appetit, and to WBTV for making it all possible, and to his alma mater, Livingstone College.

“I couldn’t have done it without Livingstone,” he said.

Making of a chef

The TV appearance is one of many highlights in Walker’s career. The Shelby native is making a name for himself in the culinary world at such a young age

During his senior year at Livingstone College, he was a chef by every sense of the word. On many occasions, he prepared meals whether for a private event or public gathering. His Instagram posts are littered with culinary creations from peach herb fried chicken and vegan chili to lasagna stuffed shells and double chocolate Oreo cupcakes. (They look as good as they sound.)

He was an active member of the American Culinary Federation (ACF) and served as the liaison between Livingstone and the ACF, which is the premier professional chefs’ organization in North America.

Last summer, as fate would have it, he was selected to be a celebrity chef for an event sponsored by Live Free Magazine of Greensboro due to another chef having to cancel. Someone recommended Walker due to this social media popularity.

He literally had less than 24 hours to prepare, getting the invitation on June 7 with the event being the next day. He had to quickly assemble a menu with precise instructions on what ingredients to use, which had to be North Carolina-based products.

“I had no earthly idea what I was going to cook,” he said. “I met with them at 3 o’clock on a Friday and had to start preparing the meal at 4 o’clock the next day.”

Walker decided on a backyard picnic theme and was accompanied by a cameraman as he went grocery shopping.

By dinnertime on that Saturday, Walker had prepared a meal for 30 people at the African American Self House in Cherryville, demonstrating his cooking skills to onlookers.

“The experience was good. I really loved it. It made me feel like a real bona fide chef,” he said.

Becoming a chef wasn’t on the mind of Walker when he enrolled at Livingstone College. He intended to major in criminal justice and theater arts, but one day he came across Vivian Ray, the first director of the Culinary Arts School, who convinced him to change his major.

He’s glad he did. Since working in culinary arts, his life has shifted momentum and afforded him many opportunities to touch the lives of others. He has volunteered at Washington Elementary School in Shelby, where he went as a child, assisting with the school’s garden club and nutritional program.

Walker credits his home life for instilling in him a love for cooking. “I grew up around a family that loved to cook. From a young age, I thought culinary arts was the international language of all human beings because everyone eats. Food brings us together and is a reason to travel,” he said.

While his love of cooking is innate, a few mentors have helped to prime his gift. Chef Lion Hughes, executive chef for a group of private country clubs, and Chef Karrell Darden, former culinary professor at Livingstone, are among his mentors.

Livingstone’s School of Hospitality Management and Culinary Arts “has shaped me into who I am. I really love the program. I love my HBCU (historically black college or university),” he said.

“All my childhood, I stayed in trouble. I was hyper and bored. I want to be an example of coming from nothing and from an alternative school. I want to show that you don’t have to repeat the cycle of hurt that goes on in a community,” he said.