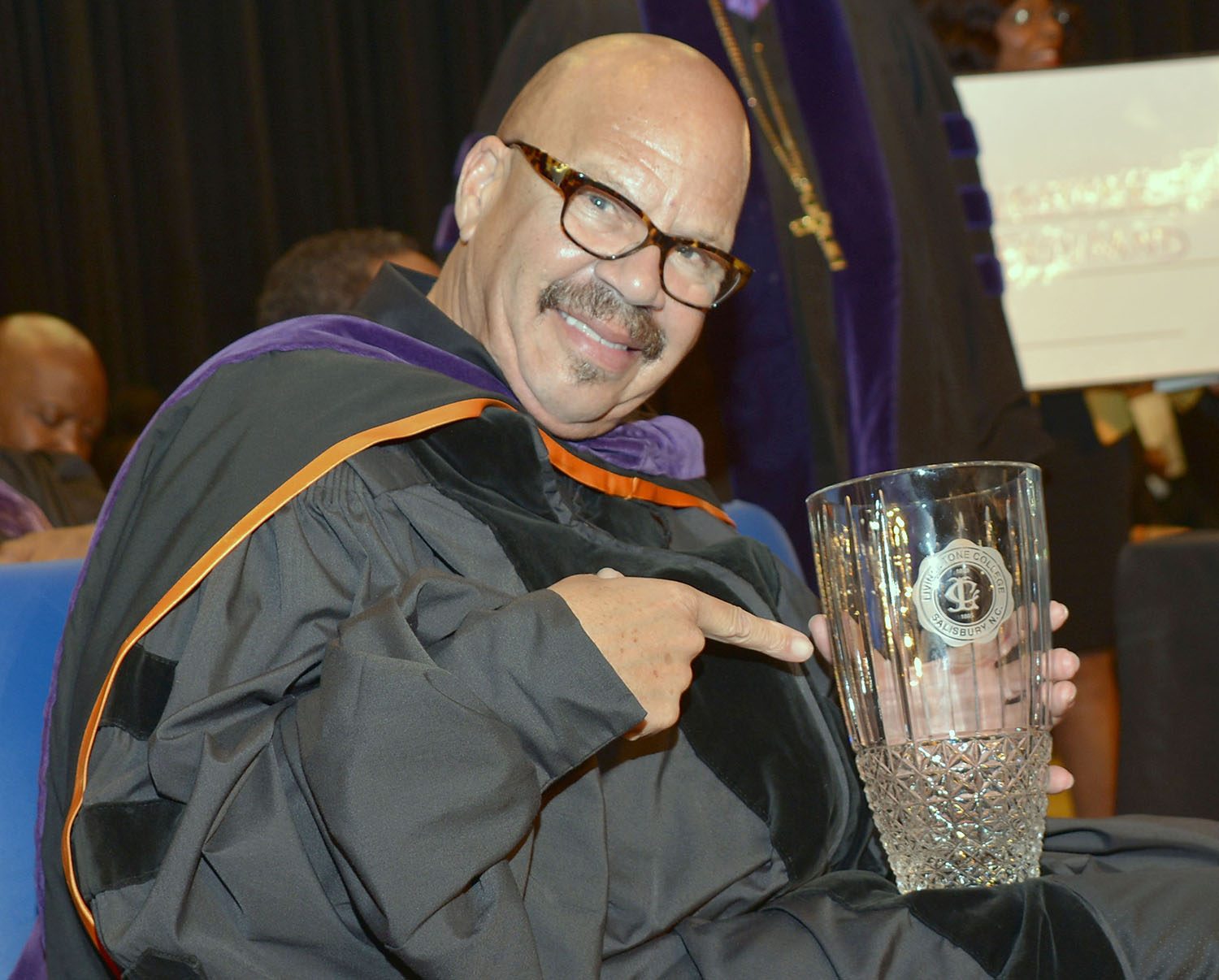 There weather was balmy and the mood was equally bright as crowds of people filed into Varick Auditorium to near capacity to hear nationally syndicate radio host Tom Joyner deliver the keynote address.

His remarks connected the exceptionalism of Livingstone College’s founder, Dr. Joseph Charles Price, to the missing link of today’s survival of black America.

“What kind of brother was Price and why did he think he could open up a school and become president of a college? He was a good preacher, a fine orator, a brilliant scholar, but a lot of black men have those credentials,” Joyner said.

The difference, he noted, was that Price “demonstrated faith in his people.”

Joyner outlined an action plan to reverse this course: give back, support black businesses and causes, and be intentional about improving the state of Black America.

In giving back, Joyner recommended choosing one thing in which you are passionate about and becoming hyper focused on making it work. For him, it is a deep love and devotion to historically black colleges and universities (HBCUs) that was instilled in him by his parents and both sets of grandparents. They all attended HBCUs.

“I love HBCUs, and I vowed to help them,” he said, which is what he does through his foundation.

In supporting black businesses and causes, Joyner said to find someone or something that you can give your time, money and talent to. He suggested supporting a political candidate, not just by voting but by contributing to the campaign; adopting a school; mentoring a child; or feeding a family. “It won’t eradicate the entire problem, but it will make a difference,” he said.

Joyner also encouraged the audience to be intentional about supporting African-Americans in the medical field, in business and education.

“Double down on something. Let’s begin a new phase of rebuilding, refocusing and regaining the pride, respect, love and faith we once had in each other,” he said.

That, he said, was the Price difference.

Livingstone President Dr. Jimmy R. Jenkins Sr., presented Joyner with the Presidential Award, the highest award the school can give, and thanked him for all he does to assist HBCUs and for his work in the community and nation.

The Rev. George E. McKain II, director of public affairs and social concerns of the AME Zion Church, received an honorary Doctor of Divinity degree from Livingstone College at the program.

McKain came with a busload of support from fraternity brothers (Phi Beta Sigma Inc.) to church and AME Zion family and friends. And he came with the same spirit of Tom Joyner – to give back and to pay it forward –  by donating $25,000. Additionally, he said the executor of his estate has already been directed to give another $25,000 to Livingstone when he “closes his eyes.”

Led by Dr. Anthony Davis, special consultant to the president for philanthropy and development, $3.3 million was raised on Founder’s Day in philanthropic support with $200,000 going toward scholarships for the School of the Month campaign. The school’s goal is to raise $700,000 for scholarships by the end of the year with special publicity this month on the Tom Joyner Morning Show.

Of the many check presentations and pledges made at Founder’s Day were several from members of the Livingstone College Board of Trustees and a $30,000 endowment established by the International Connectional Lay Council of the AME Zion Church.

Mary Matthews, international Connectional Lay Council president, presented the college with the check and signed the scholarship agreement on stage. The scholarship applies to students who have a cumulative 3.0 or higher and who have a financial need. To see a photo gallery of check presentations, visit livingstone.edu.

“We’ve never had a donation of gifts like that to the Tom Joyner Foundation,” Joyner said of the presentations. All money raised through the foundation is returned to the school for scholarships.

“Our ability to secure scholarship money is strategic based upon our student profile and the population we serve,” Davis said. “This enables us to put our money where our mission is. In other words, investment that drives impact.”

“It was a great day, and we appreciate all those who attended and who gave generously to this institution,” Jenkins said. “Members of the board of trustees led the charge, and we intend to capitalize from this momentum as we advance our two major fundraising campaigns this year.”

To donate to the School of the Month campaign, text LCBlueBear to 41444; donate online at www.livingstone.edu (Click Tom Joyner banner, ways to give and select the Tom Joyner School of the Month from the designation dropdown menu); or mail a check/money order payable to Livingstone College, 701 W. Monroe St., Salisbury, NC 28144 with Tom Joyner SOTM in the memo line. Anyone donating at least $2,500 will be eligible to receive airtime on the nationally syndicated Tom Joyner Morning Show.