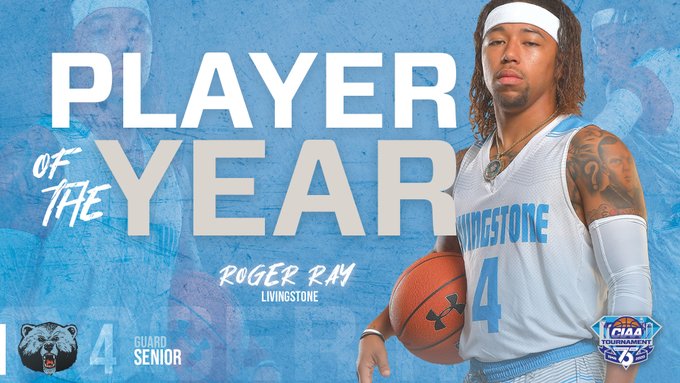 It was a great start to the CIAA Tournament for Livingstone College as its basketball standout, Roger Ray, was named CIAA Player of the Year.

The CIAA (Central Intercollegiate Athletic Association) presented Ray with the award at the annual Tip-Off Awards Luncheon, held Monday at the Charlotte Convention Center, in which All-Conference and other superlatives were named.

Ray led the CIAA in both scoring and assists during the regular season with 23.8 points and five assists per game while shooting over 43 percent from the field, seventh best in the CIAA.

The Raleigh native ranks second in the conference at nearly 38 percent from three, and his 82.8 free throw percentage is top four in the league. One of the top scorers in Division II, Ray’s 45 points against Virginia State were the most by a player in the CIAA this season.

The 5-10 lead guard will finish his career as Livingstone’s all-time leader in both scoring and assists.

Daisa Harris of the Blue Bears women’s basketball team was named to the All-CIAA Women’s Team for the third consecutive year.

Freshman Jada Richardson was named to the CIAA All Rookie Team.

Livingstone College also shined with performances off the court as the college received double wins for the CIAA Highest GPA Award for the men and women’s basketball teams.

Members of the Blue Bears men’s basketball team had an average GPA of 3.15, while the Lady Blue Bears’ average was 3.39.

This is the second consecutive year that the men’s team has won the GPA honor, but the fifth time overall. The team is coached by James Stinson, who places heavy emphasis on winning first in the classroom and provides resources, time and opportunity for the students to achieve academic success.

Coach Chiante Wester, who is in her first year as the women’s basketball coach, received the honor on behalf of the team and was thrilled by the academic prowess that is running parallel with the team’s on-court performance this season.

To say Livingstone College President Dr. Jimmy R. Jenkins Sr. was ecstatic at Monday’s luncheon is an understatement. After winning five athletic honors and to then win the top two academic awards was a singular moment for Livingstone College, which prides itself on providing a holistic college environment.

“I could not be more excited and proud of the accomplishments of our student athletics on the court and in the classrooms,” Jenkins said. “Recognition such as this demonstrates the efforts of our coaches and faculty to develop student potential, and instills the idea that education is the surest vehicle for upward mobility.

“Congratulations to the student athletes, but also to the coaches who do a phenomenal job in working with these young people and balancing academia and athletics in a culture of competitiveness,” said Livingstone Athletic Director Lamonte Massie-Sampson.

This year, the CIAA is celebrating its 75th anniversary as it bids farewell to the host city of Charlotte. The Blue Bears women’s team is ranked third in the Southern Division with an 8-9 record in conference play. The men are ranked sixth with a 5-12 record.

The single-elimination tournament will be held in two venues again this year: Bojangles’ Coliseum February 25-26 and Spectrum Center February 27-29. Championship games will tip-off at 1 p.m. for the women followed by the men at 4:30 p.m. on Saturday, February 29.

“No matter how the rest of the week goes, we’re already winners,” Jenkins said.

The CIAA contributed to this article.