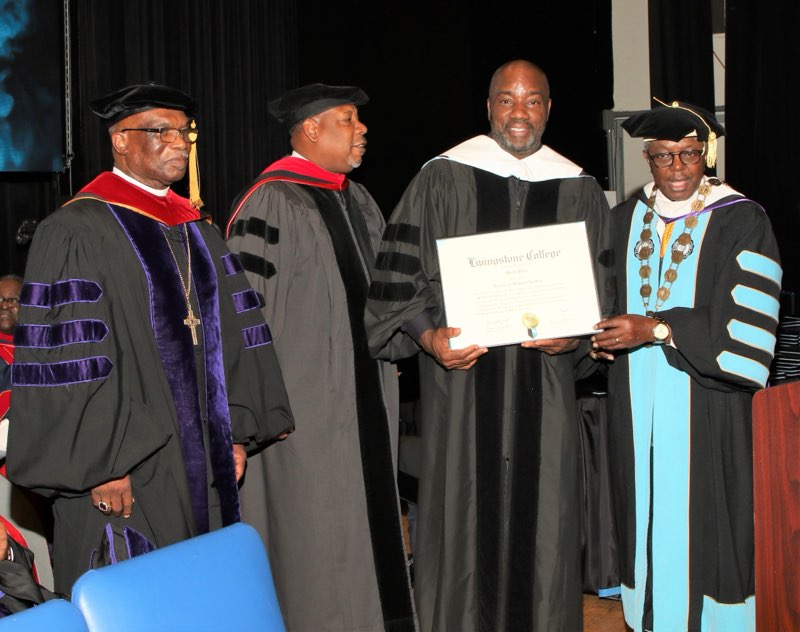 SALISBURY, NC – In the words of actor Malik Yoba, Livingstone College’s graduation was the best he has ever experience, and the most memorable for retiring President Dr. Jimmy R. Jenkins, Sr.

“Livingstone College, I’ve never seen a graduation like this anywhere and I’ve spoken at hundreds of them … This is the ‘littest’ graduation I’ve ever been to in my life. I ain’t lying,” the Hollywood veteran said, referring to his emotional and spiritual responses throughout the program.

Malik received an honorary Doctor of Humane Letters from the historic black college in Salisbury after an emotional, tear-jerking program.

Wade also thanked his help, those brothers and sisters who wouldn’t allow him to stay stuck in a negative place; his home, naming his mother, father, relatives and ascended ancestors; and his heavenly father.

Moved by Wade and a spiritual song titled “Grateful,” sang by soloist Virginia Rush that preceded his speech, an emotional Malik took to the mic and asked the musicians to keep playing. He then started singing in the same tune, “The part that you don’t know, it’s the part that you don’t know. You sing about hearts. You sing about love. We’ve all been through pain, but remember His name.”

He then asked the graduates who were wearing shades to remove them. One graduate, Nequareus Roberts-Simon, referred to as “Q,” hesitated to remove them. He asked the audience to pray for “Q” and then sang to him, “Q, I came here for you, even if you didn’t want me to.”

“It’s the trauma that we carry with us. He wants to take those glasses off, but in this moment, he feels vulnerable,” Malik said. After a few minutes, “Q” removed the shades. Later in the program, Malik called “Q” up front to speak with him and asked him his major. He responded criminal justice.

Malik then called one of his friends, Scott Esdaile, who was in the audience, up front to meet “Q.” Esdaile introduced himself as the national criminal justice chair for the NAACP and the crowd erupted into cheer. “Look at God,” Malik said, regarding making connections.

Malik’s focus today is his company called Yoba Development, designed to break barriers for people of color in the real estate industry. He intends to collaborate with Livingstone College, which owns hundreds of acres of land.

“I am very interested in working with Livingstone College because there isn’t one HBCU that has a real estate development degree program, and I think that it should start here and it should be a partnership with Yoba Development,” he said. “Yoba Development builds people, places and things – in that order.”

The emerging real estate developer has projects in NYC and Baltimore, and is in post-production for his educational docuseries, “The Real Estate Mixtape, Volume 1: Build NY.”  The series follows Malik and a cohort of youth as he navigates his first commercial real estate deal in NYC, which is currently happening in the South Bronx, and includes the building of a new school, sports and wellness center and affordable housing.

“God ain’t making no more land, so we need to be the lords of our land,” he said. “Livingstone College has equity and agency over its destiny. It doesn’t matter that there are under a thousand (students),” he said.

A Hollywood veteran with more than three decades of commitment to the arts, Malik has amassed over 50 film credits and more than a dozen lead roles in network/cable TV series. His debut in the Disney classic “Cool Runnings” and his performances as New York police detective J.C. Williams in the groundbreaking police drama, “New York Undercover,” catapulted Malik into the fabric of American culture.

Jenkins, who announced his retirement earlier this year, said his final commencement as president was one of the most memorable. Like the graduating class, it is bittersweet as he enters a new stage of his life as a retiree.

In honor of Jenkins’ service, Bishop Lartey, a Livingstone College Board of Trustee member and presiding prelate of the Central-Southern Africa Episcopal District of the A.M.E. Zion Church, made a special video presentation at the program. He announced that upon the completion of the Central Southern Africa Episcopal District’s Unity Headquarters in Lauana, Angola (South Africa), it will house the Dr. Jimmy R. Jenkins , Sr., Transatlantic Distance Learning Center.  The Center will be located in Angola and Malawi, South Africa.

“The decision to establish these centers bearing the name of Dr. Jimmy R. Jenkins, Sr., is directly related to the significant impact of Dr. Jenkins on the brand of educational philosophy and theory that views education as a discipline, which should be holistic in nature,” Lartey said.