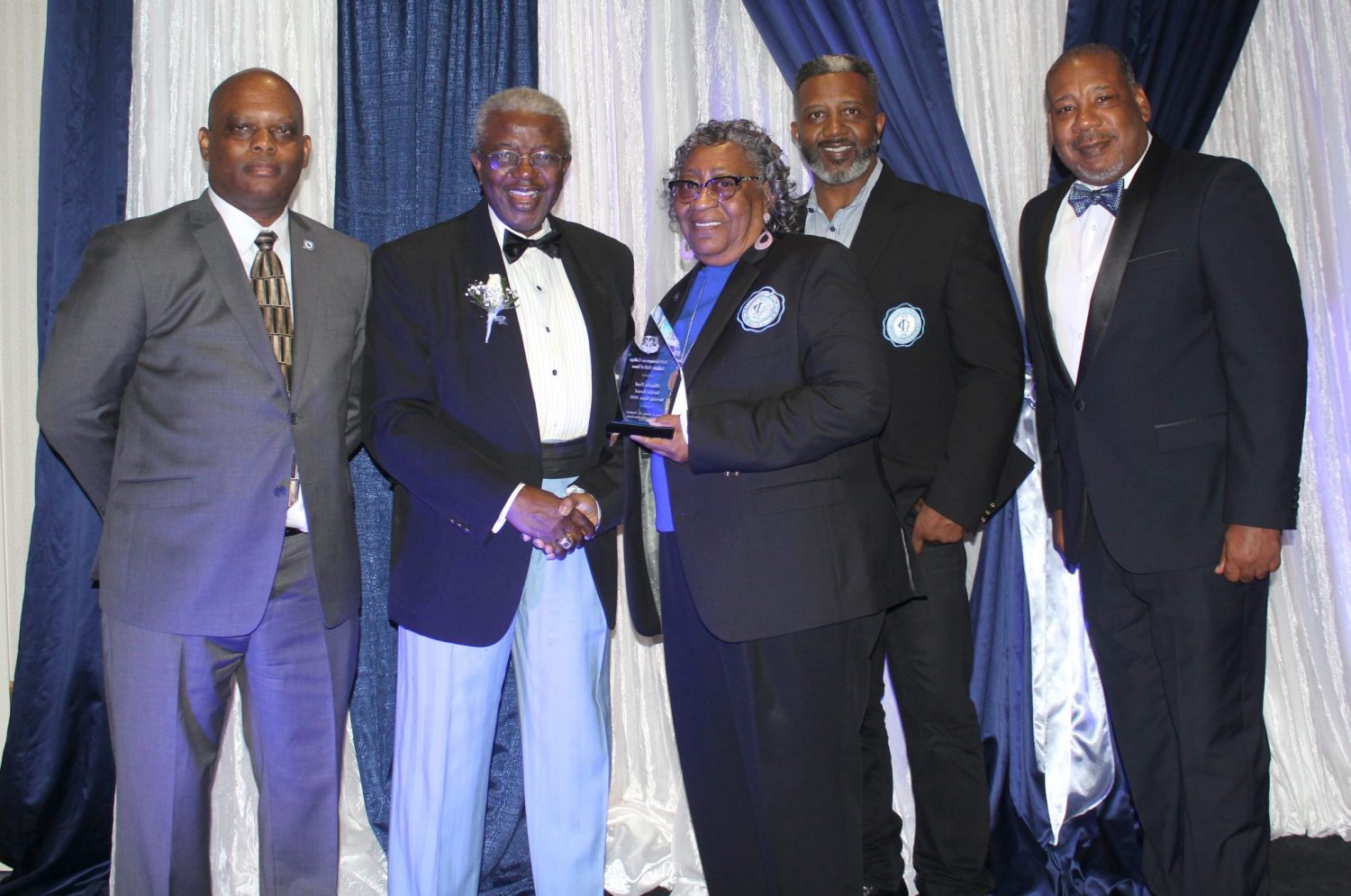 SALISBURY – Livingstone College announced that it was inducting five into its Athletic Hall of Fame during Homecoming Week, but there were actually six recipients.

The sixth inductee remained a secret until the day of the dinner program.

Blanche Ford, administrative assistant for Livingstone’s athletic department, was surprised when she learned at the Hall of Fame dinner that she was being inducted for meritorious service.

Ford started her career at Livingstone in 1970 in the physical plant department as administrative assistant and eventually transitioned to athletics. She was also cheerleading coach from 1993 to 1998.

She ventured out from Livingstone in 1998, but returned in 2006 to the athletic department to reprise her role.

“She has impacted the lives of many students, taking them under her wings and treating them as her own,” her bio reads in the program. “With that being said, Ms. Ford has a lot of Blue Bear children.”

“She is number one for several reasons,” Veale said. When he was dropped off at Livingstone as a timid freshman, the first place he went was the athletic department and there was Ford, offering him maternal nurturing.

Ford was grateful but shocked to learn of her induction, complete with an official Hall of Fame jacket presented by Livingstone President Dr. Jimmy Jr. Jenkins and Athletic Director Lamonte Massie-Sampson.

“I didn’t know until Troy called my name,” Ford said.

The athletic department also reserved seating at the dinner for other administrative assistants across campus to attend in support of Ford.

“Ms. Ford is a staple in the athletics department,” said Massie-Sampson. “As Troy Veale stated, she has nurtured many student-athletes and made the transition from home to college a much more pleasant experience for them. We appreciate her loyal service and the cohesiveness she brings to this department. It was our pleasure to induct her into the Athletic Hall of Fame.”

Posey is a 2003 graduate of Livingstone who was named Most Valuable Back and to the All CIAA Football Team in 2001. In 2002, he was named Male Athlete of the Year. Post Livingstone, he signed a three-year deal with the Hamilton Tiger Cats of the Canadian Football League. He has been an educator for the past 16 years and real estate investor for eight years.

Hampton was a four-time CIAA wrestling champion, four-time NAIA regional wrestling champ and a two-time NAIA All American. He finished sixth in the U.S. Final Olympic Trials in 1976. He was also a punter for the football team and averaged 42 yards per punt. After Livingstone, he conducted clinical research and assisted in developing the first AIDS Diagnostic Kit for Abbott Laboratory in 1984. Today, he continues his clinical research as a senior associate.

Young, a 1976 graduate, made the All CIAA Tennis Team several years, was Individual CIAA Runner-up in singles and doubles and was Team CIAA Southern Division champion. He was a four-year letterman as a tennis player and was sports editor of the Livingstone yearbook. A former tennis coach for 16 years, he coached 20 All Conference players. He is retired from Haverster Company and Guilford County Schools.

Johnson was named Freshman Athlete of the Year for basketball at Livingstone in 1978. He became one of the leading scorers and rebounders as a guard. He has worked for W.B. Moore for 16 years as senior electrician and coached Little League baseball and youth basketball.

Cooley, class of 2017, started every football game for four years as a freshman (42 consecutive games record) from 1995-1999 as an offensive center, guard and kicker. His junior year, he was selected All CIAA 2nd Team kicker, and made Black College All American honorable mention kicker, being No. 4 in total points as a kicker in black college football. His senior year, he made offensive lineman of the week three times and finished his career as a kicker with 121 points in only three years as the starting kicker, which is a Livingstone record, and a top 5 all- time CIAA in PATs made. He played arena football with the New Haven Ninjas in New Haven, Connecticut, and was offered a free agent contract with the Baltimore Ravens and Miami Dolphins, in which he declined to pursue his professional career in mental health.