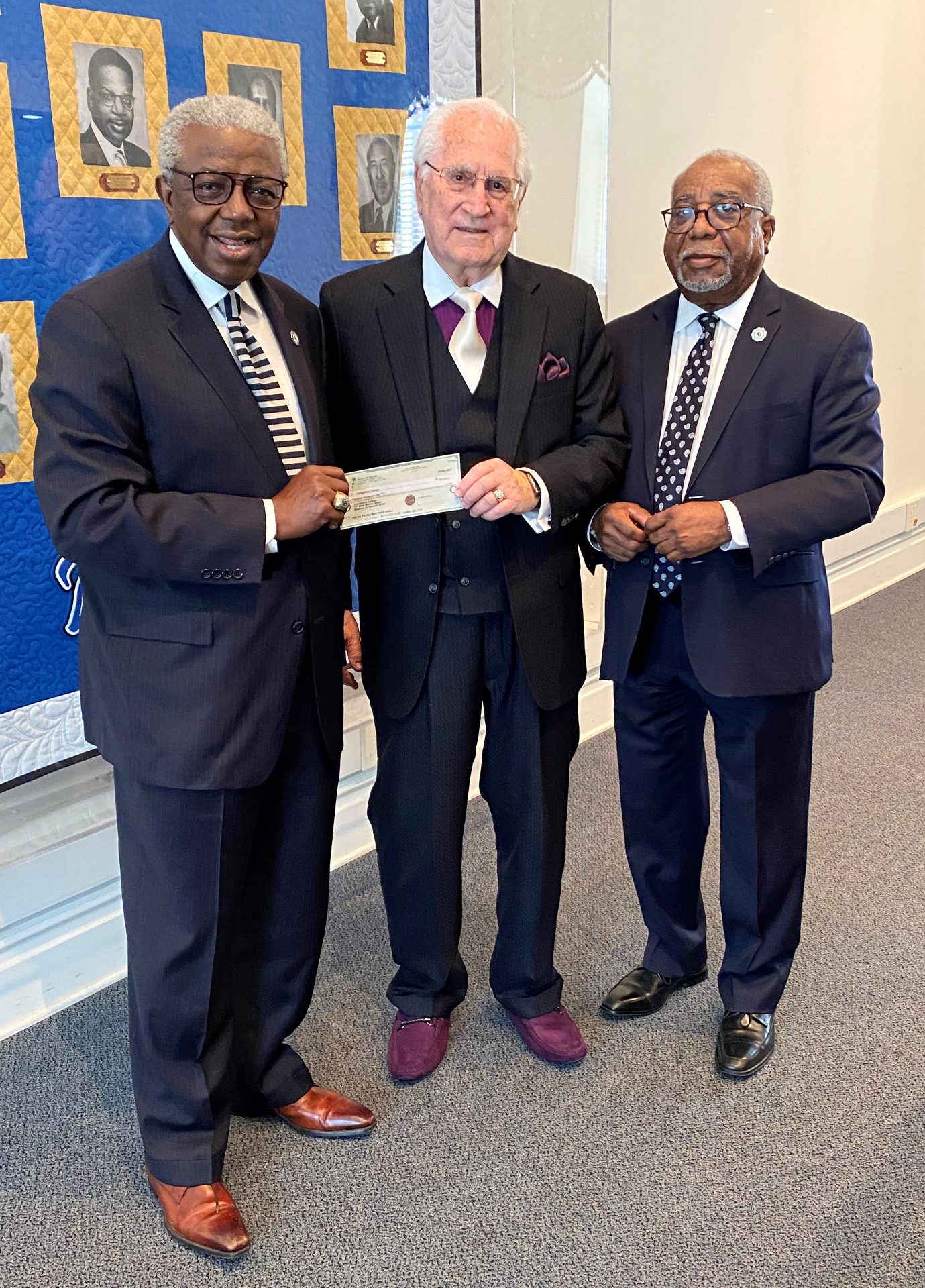 Broadcast legend William “Bill” Reid Rollins has donated $200,000 to Livingstone College to support the genesis of its communications program.

Rollins, former chairman and chief operating officer of Suburban Radio Group, visited the Salisbury campus on April 30 with his attorney, Mark Prak. During a business luncheon in the Hilliard Room, Rollins presented Livingstone President Dr. Jimmy R. Jenkins Sr., with a check for $200,000.

The gift will go toward the college’s proposed communications program.

In making the presentation, Rollins said the donation stemmed from his relationship with Dr. State Alexander, Livingstone’s executive assistant to the president and vice president of communications and public relations. Alexander started his career in the radio industry and worked at WPEG 97.9 FM in Charlotte when Rollins owned the major urban market radio station decades ago.

The two were recently reunited due to a stroke of serendipity. Last year, Rollins was featured on a PBS series highlighting North Carolina broadcast legends. Alexander was having trouble sleeping one night and decided to watch some late-night TV, where on the screen was a rebroadcast of Rollins’ episode.

It has been the vision of Alexander to start a communications program at Livingstone for several years, and he had often thought of reaching out to Rollins to help jumpstart the project.

“Waking up and seeing him on TV was all the confirmation I needed,” Alexander said. He later sent a proposal to Rollins and the rest is the beginning of history in the making.

Rollins, who is former president of the National Association of Broadcasters, is responsible for several TV stations including what is today known as Charlotte’s WJZY Fox 46. His interest in broadcasting began while listening to WAYS AM radio while attending Piedmont Junior High in Charlotte. He used to call the radio station during its record show at night and request songs. He became friends with the telephone operator at the station, and one day the operator asked Rollins if he would fill in answering phones one night so he could attend the local junior-senior prom. That was the first of several jobs there for Rollins.

After military service, Rollins eventually became business partners with another broadcast legend, the late Robert “Bob” Hilker, which led to his role with Suburban Radio. He later got into TV and became an industry leader whose vision made an impact at both the state and national levels.

During the campus visit, Prak, a media attorney who also teaches communications classes at his alma mater, Duke University, met with a group of Livingstone students interested in communications. He spoke about the history of communications and its future as it pertains to social media. He also gave general advice to students on how to differentiate themselves from others in the industry.

Livingstone’s burgeoning campus radio station, WLJZ 107.1 FM, serves as ground zero for the communications program. The station has sparked a lot of interest from students and the community with its hip-hop format, morning show and educational programming.

Keith “Synphany” Anderson, radio station manager, has also transformed part of the station into a broadcast studio, complete with a green screen, teleprompter and news desk for interviews, news and sports programs and campus video messages.

The station is drawing interests from regional and national music artists and record labels. Due to a recent grant, a podcast café will also be built next to the station to aid the communications platform.

“Thanks to Mr. Rollins, Livingstone College can start to cultivate the next generation of leaders in communications,” Jenkins said. “We recognize the value of this industry, especially in this era, and are excited to soon offer students a Bachelor of Arts in communications.”

“This was an extraordinary day in the life of Livingstone College,” Alexander said. “I am excited and proud that William R. Rollins, a legend in broadcasting, desires to support the next generation of communicators, especially in broadcasting.”