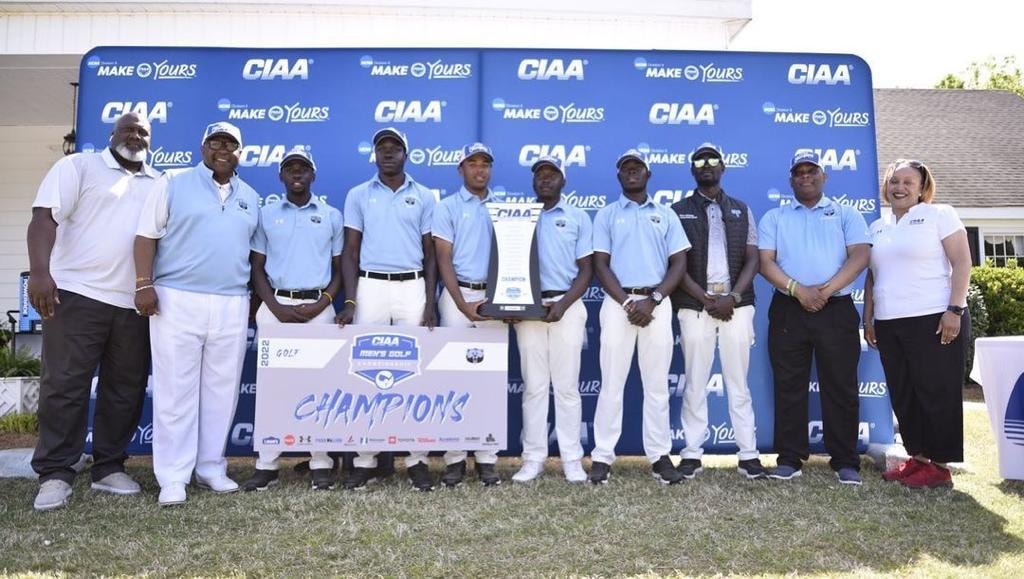 SALISBURY – The Livingstone College Golf Team cinched the CIAA 2022 Golf Championship over the weekend, culminating a stellar season that has the ingredients of a made-for-TV movie.

The Blue Bears maintained their position atop the leaderboard at Chicora Golf Club in Dunn, finishing the two-round championship tournament with a team score of 582 (+14) to capture its first title since 2018.

Livingstone finished 19 strokes ahead of second place Virginia Union, who finished a score of 601 (+33). Fayetteville State finished third with a team score of 609 (+41).

Joel Basalaine of Livingstone College finished atop the individual leaderboard at 141 (-1) to claim the low medalist award. Basalaine shot a 71 (E) in round two and needed a playoff hole to overtake his teammate and roommate Xavier Proctor, who came into the day as the individual leader. Basalaine and Proctor were named to the All-Tournament team for their efforts.

Proctor of Livingstone College was also named 2022 CIAA Player of the Year.

This year is remarkable in many ways. The season started with Springs out due to health reasons. Within the past year and a half, he has undergone five major surgeries and had to hire an assistant golf coach for the first time in his 22 years as Livingstone’s golf coach.

Titus Okwong, a former player and captain of the Livingstone golf team, led the team as assistant coach from the fall until Springs’ return in January.

“I knew it would be an exciting year because of how it started,” Springs said. When the team was headed to compete in Alabama, they stopped by to visit Springs. “We had a great conversation. I told them to make sure they followed Titus’ leadership because I would be talking to him. He would be my mouthpiece.”

When Springs returned, the game plan was to take it “one tournament at a time. No one on the team had ever won a championship before.” His advice was for the team to focus on the next tournament rather than the championship.

Heading into the championship, Livingstone College was already celebrating its ranking as the No. 1 HBCU golf team in the nation among NCAA Division II teams.

“We’ve never been ranked this high,” Springs said. “This is the best team I’ve ever had. All of them are good and they are real close. They compete against each other.”

Springs’ said one of the reasons the team performed so well this year is because it competed in more out-of-conference tournaments. For that, he gives credit to Livingstone President Dr. Jimmy R. Jenkins, Sr., for approving the funding to do so as well as for bringing him back to reinstate the golf program after it had been dormant at Livingstone for 20 years.

He also thanks Athletic Director Lamonte Massie-Sampson for his support during the season and for attending the CIAA golf championship. “It meant a lot to the players and it meant a lot to me,” Springs said.

“I’m happy to be a part of a winning team. We are lucky to have an exceptional group of elite young golf athletes all determined to defy the odds in pursuit of their career goals and dreams, both academic and athletic,” Okwong said. “The players are very hardworking and committed to do whatever it takes to deliver results both on the course and in class.

“I would like to thank Coach Springs for entrusting me with this position … He saw something in me that others couldn’t see. As an assistant coach, I have done within my capacity whatever is needed to get the players ready and at their optimal performance levels for every tournament we’ve played,” Okwong said.

The last time the golf team won the championship was in 2018 when it swept all of the major awards, having won both the southern and northern division championships, and the highest academic award within the CIAA. But that year, Springs did not win coach of the year as expected.

This is Springs’ third time winning the honor, but he said this award is sweeter. “It was sort of disappointing when I didn’t get it in 2018. I did all I could do. We swept everything. But this year, we are also number one in the nation as an HBCU in the NCAA Division II. This gives it more distinction,” he said,

Livingstone receives an automatic berth to represent the conference at the NCAA Golf Atlantic Regional, which takes place May 5-7 at Ravenwood Golf Club in Victor, New York. Top regional finishers will head to the 2022 NCAA Division II Golf Championship on May 16-20 at TPC Michigan in Dearborn, Michigan.

“We will give our golf team the celebration and proper recognition it deserves for doing an extraordinary job in representing Livingstone College in golf,” said Jenkins said. “This is a real-life fairy tale, where we won it all: CIAA Champions, Southern Division Champions, Coach of the Year, Player of the Year and No. 1 ranked HBCU in the nation (NCAA Division II). “It doesn’t get any better than this.”