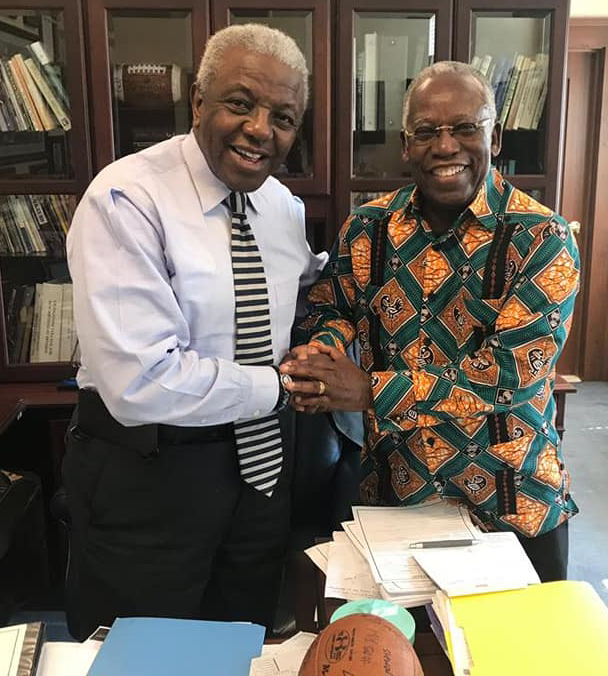 SALISBURY – “Until lions have their historians, tales of hunting will always glorify the hunter,” says an African proverb.

Author Kojo Yankah of Ghana in his recent book, “From Jamestown to Jamestown: Letters to an African Child,” tells the lions’ tale of African history to a young African girl in the form of letters.

As part of his American book tour, Yankah visited Livingstone College last week and led a stimulating lecture to Dr. DaTarvia Parrish’s African-American history II class. His tour includes stops in Georgia, Delaware, New York City and Boston. His only other visits in North Carolina were at N.C. State and Duke universities.

As founder, board chairman and past president of the African University College of Communications (AUCC) in Ghana, Yankah also included as part of his visit to Livingstone the possibility of exploring a collaboration with AUCC.

In 1994, Yankah was chairman of the Pan-African Historical Theater Festival in Ghana and was invited to participate in a symposium and event in Jamestown, Va. It was during that visit that he pondered the link between that Jamestown and the one in Ghana. His research and discovery is what led to his 10th book and its title.

Yankah’s book release coincides this year with the 400th anniversary of the Transatlantic Slave Trade.

“Four hundred years ago, the first 20 Africans were shipped out of Angola in south west of Africa to America,” he said to the class. The question is, why did anybody want to bring Africans on the continent of Africa to these parts of the world? The answer to that question opens the door to his lecture, offering students a concise snapshot of African history and the importance of knowing more about the land from which all civilization began.

Yankah spoke of Africa’s richness in minerals such as gold, diamonds, uranium and oil; of its kingdoms and kings, queens and pharaohs that ruled in the 17th century; and of its brilliant and advanced universities and architectural edifices.

Colonization dismantled the continent during the scramble for Africa by Europeans. Yankah takes readers on a journey from Jamestown in Accra, Ghana, through the Middle Passage to the Americas and their settlement in Jamestown, Va., highlighting major rebellions and religious influence.

“African history is not taught in schools. People in Africa don’t know what happened to Africans once they left Africa,” he said. “It is part of my interest to get students like you to know more about Ghana. It is important to find a way to bridge the gap. We do not know each other. The important thing is that we have the same heritage. We came from the same stock. Because we do not know each other, we do not even know the history.”

Going forward, Yankah explained that the African Union (AU), led by Ambassador Dr. Arikana Chihombori-Quao, who wrote the forward in his book, consists of 55 member states that make up the countries of the African continent. The main goal of the AU is to rid the continent of the remaining vestiges of colonization and apartheid and promote unity and solidarity, creating a United States of Africa and global force.

Quao writes: “I can see this book filling the gap that miseducation has created for Africans on the continent as well as in the diaspora. It is a book to read in every home, school and library … it is a masterpiece.”

“We cannot change the past. It’s time for us, wherever we are in the diaspora, to come together as one,” said Dr. Parrish.

Livingstone President Dr. Jimmy R. Jenkins, Sr. and Dr. State Alexander, executive assistant to the president and vice president of communications, met with Yankah during his visit and are hopeful about future collaborations with his university in Ghana.

Throughout the year, Livingstone has connected its 140th anniversary with that of the 400th anniversary of the Transatlantic Slave Trade. There is already a strong link between Ghana and Livingstone in that of Dr. James Aggrey of Ghana, a historical Ghanaian icon who earned his undergraduate and master’s degrees from Livingstone and his divinity from Hood. Aggrey, who became a lifelong resident of Salisbury, cofounded Achimoto School in Ghana and his face is featured on the 5-cedi bill there.

“African history has been hidden and Yankah’s book and discussions uncover all that is great about Africa, its people and its land,” said Kimberly Harrington, assistant director of public relations for Livingstone College. “The more the African diaspora knows about its history, the more it can be proud of and reflect the greatness that lies within. If knowledge is power, this book is dynamite.”