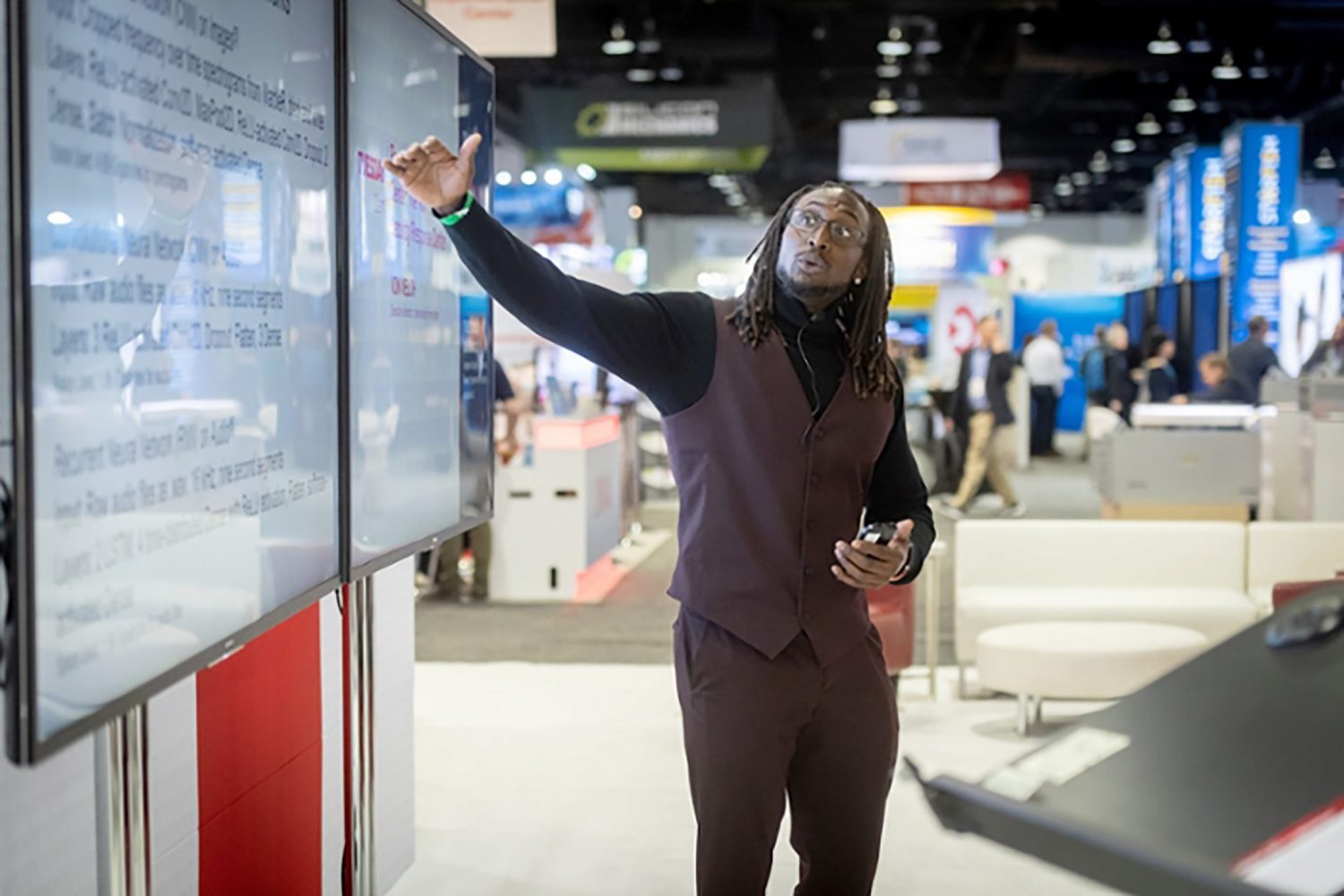 SALISBURY – Livingstone College student Tenecious Underwood is charting a path to success that is uniquely his own.

The senior computer information systems major began his academic year with the coveted honor of being selected as one of 44 White House HBCU Competitive Scholars in the nation, based on academic achievement, campus and civic involvement and entrepreneurial ethos.

This is the highest student recognition by the White House Initiative on Historically Black Colleges and Universities that illustrate that HBCUs produce – often against the odds – strong, impressive educational, economic and societal results that impact the communities in which they serve.

Further proving his scholarly edge, Underwood, a Fayetteville native, was also recently recognized for his participation in a research project that is leapfrogging the science of frog language.

Everyone knows that a frog says “ribbit,” but did you know that their calls have a deeper, more impactful meaning?

Frogs are considered “canaries of the coal mine,” for their ability to indicate ecological or environmental crises before humans notice a broader impact. Frogs have permeable skin, making them vulnerable to even small changes in their aquatic environment.

As a result, 32 percent of frogs are in decline due to a combination of habitat loss, disease and climate change. This statistic worries scientists, so ecologists across the nation are eager to study declining frog populations.

Underwood had the distinct opportunity to participate in the Jetstream Research Experience for Undergraduates (REU) and present his findings at the world’s largest supercomputing conference, SC19, in November in Denver, Colorado.

The Jetstream REU invites students to work with Indiana University researchers and staff on mentored research projects that involve the Jetstream platform. Led by the Indiana University Pervasive Technology Institute (PTI), Jetstream is a national science and engineering cloud that provides on-demand high-performance computing (HPC) and data analysis resources for research and education.

Underwood and his cohort in the Jetstream REU are bringing machine learning and HPC to the problem of identifying frog migration patterns.

“It is imperative that national frog surveyors are able to accurately identify where frogs are and where they are moving,” Underwood said. “The entire scope of the project is to make artificial intelligence useful in fields that make up the long-tail of science.”

However, before Underwood and his colleagues could start gathering these calls, they had to know what they were listening for.

From students to frog surveyors

The Jetstream REU team wanted to identify amphibians specifically from the Indiana region – Spring Peepers, Chorus Frogs, Green Frogs and American Toads. They gathered sample calls from Cornell’s Macaulay Library archive of wildlife sounds – 85% of the calls were used as training data and the remaining 15% served as testing data.

The result? Computer frog surveyors are much more accurate than their carbon-based counterparts. The CNN image-based model came out on top as being the most accurate and most efficient. It also took up less space and took less time to process.

“Human national surveyors accurately predict 80 percent of the frog calls species. The image-based CNN produced over 97 percent accuracy, with the four frog species,” Underwood said. “The CNN audio and the RNN audio both produced nearly 90 percent accuracy. All three are what you could call superhuman.”

Processing the more than 5,000 audio files they had recorded would have taken up to 20 hours on a laptop computer. Thanks to Jetstream, it took only minutes.

“We couldn’t have accomplished anything without Jetstream,” Underwood said. “It made the process more efficient and effective, and allowed us to be able to do a lot more.”

He hopes to improve the accuracy of the team’s findings so ecologists can even more accurately identify frog calls. The solution? Add more data.

“I believe we had 1,500 samples per dataset, and the last one we had just 1,000.” Underwood said. “Those extra 500 segments would actually benefit the CNN and RNN audio because they’re only taking this small proportion of data. If you give them more data, they would predict a more accurate rate.”

Most college students don’t get the opportunity to work with high-performance computing tools until they reach graduate school. So how did Underwood land a chance to work with Jetstream while still an undergraduate?

Growing up in North Carolina, Underwood always had an affinity for math and computers. But it wasn’t until a lucky meeting with a fraternity brother from Indiana University at the Emerging Researchers National Conference in STEM that he applied for the Jetstream REU program.

“[Livingstone] helped me grow and come out of my comfort zone to be able to go to an institution like Indiana University and be successful with the frog call project,” Underwood said. “You don’t see many African-Americans in my field at all. So it’s everything to do with being at an HBCU, and the fact that you are seeing people every day who empower you to be the best you that you can be.”

Next year, Underwood will study at Kentucky State University for a graduate degree in computer science with a specialization in cybersecurity. He hopes to open his own IT consulting firm and wants to do his part to make the tech industry more inclusive.

“I see myself bringing more cultures and more people into this field,” Underwood said. “I believe there needs to be more women, more cultures, and there definitely needs to be an increase in African-Americans in this field. Don’t let them tell you that you can’t do it … despite what statistics may tell you. Don’t let them ever tell you that you can’t be the successful person that you’ve envision your entire life.”

Livingstone President Dr. Jimmy R. Jenkins, Sr., said Underwood is a paradigm for the positive impact an HBCU can have on a student.

“His accomplishments reveal the depth and diversity of our student population and their interests,” Jenkins said. “Our holistic model approach to learning has provided him with the tools and confidence he needs to command his rightful place in the global society, and we are extremely proud of his professional development and innovative research in this field.

Click here to watch a video of Tenecious Underwood explaining the language of frogs.

Lucy Smith of ScienceNode.org contributed to this article.