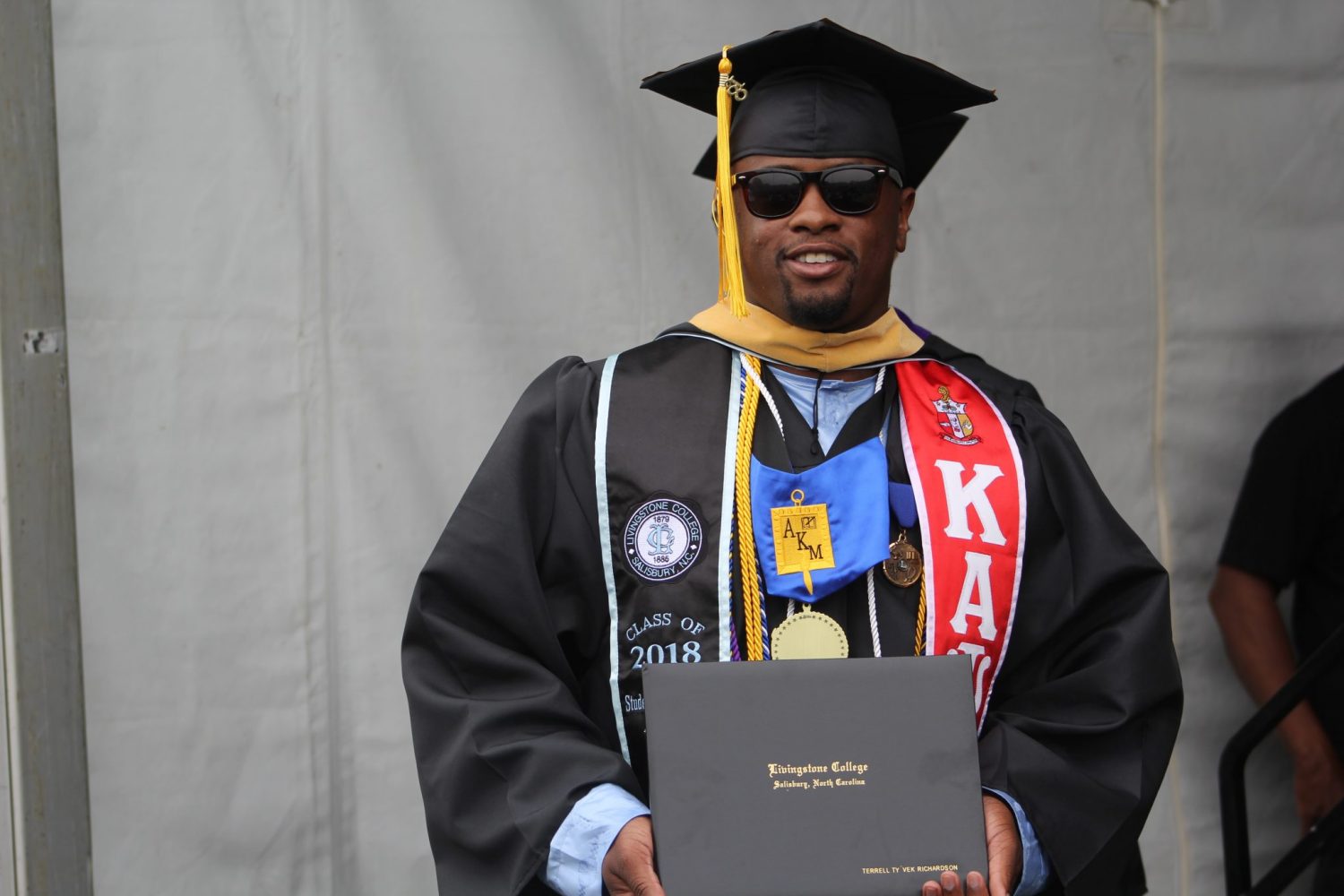 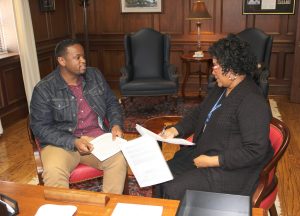 Livingstone SGA president Terrell Richardson, left, works with Salisbury Mayor Al Heggins. He was the first intern for the City of Salisbury mayor’s office and will graduate May 5 with a bachelor’s in social work.

When he steps to the podium, the audience quiets with anticipation. He’s developed a reputation of saying something so arousing that even bishops stand to their feet.

Though he has the mannerisms of a clergyman, he shuns those references, at least for now. His dream, he says, is to become a college president of a historically black college or university.

On Saturday, he will become one step closer toward that dream as he walks across the stage as a Livingstone College graduate.

Richardson took advantage of his only chance and excelled during his matriculation at Livingstone. In addition to being the SGA president, he was the junior class president and a member of the Rotaract Club, the Livingstone NAACP chapter, Phi Alpha Honor Society, Alpha Kappa Mu Honor Society and a resident assistant.

A social work major, he was also a member of the Social Work Action Group.

Last summer, he was selected as a Walton Fellow, completing an intern in Washington, D.C., at Friendship Public Charter School, overseeing 10 summer programs. The Walton-United Negro College Fund K-12 Education Fellowship is a leadership and talent development initiative that aims to build a robust pipeline of high-achieving African-Americans engaged in education reform.

Also in 2017, he was appointed as a White House HBCU All Star Student Ambassador from a rigid selection process. All-Stars are appointed for one year to serve as ambassadors of the White House Initiative on HBCUs. They provide outreach opportunities and communications to their fellow students about the value of education and the Initiative as a networking resource. All-Stars come highly recommended from HBCU administrators and proved impressive beyond their resumes, transcripts and thorough applications.

“Through this opportunity, I was able to attend the HBCU Conference in Washington with Dr. Jenkins (Livingstone College president) and other college presidents and ambassadors,” he said.

Richardson, who is a member of the Kappa Alpha Psi Fraternity Inc. (Gamma Delta chapter), was selected as the fraternity’s Grand Strategus, one of its highest offices, at the 83rd grand chapter meeting in Orlando, Fla., last fall.

The Wilmington native made history this semester by becoming the first intern at the City of Salisbury’s mayor’s office. The agreement was made under former Mayor Karen Alexander and it was upheld by newly-elected Mayor Al Heggins. There, he worked in every city department and coordinated the inaugural Collegiate Gathering with a goal to strengthen partnerships between the four higher learning institutions in the community.

If he had to choose one role model, Richardson said it would be Heggins. “The mayor taught me to always be strong in what you believe in and to stand up for what’s right. Regardless of what people are saying, always contend for what’s right. She told me we are put here on earth to defy odds and that nothing is impossible. She inspired me in many ways.”

“Terrell Richardson is a remarkable young man,” Heggins said. “His presence in the mayor’s office will be missed. He will continue to be a blessing to many lives; just as he was to the city and community of Salisbury.”

Going back to his faith, Richardson said he is a Christian and his strength in life is found in the Scripture Job 22:28: “Thou shalt also decree a thing, and it shall be established unto thee: and the light shall shine upon thy ways.”

His deeply rooted faith comes from his grandmother, Elouise Howard, who passed away his sophomore year. “She taught me the value of success and prayer and recognizing God. One should never be afraid to give God the glory,” he said.

He said his mother, Sabrina Harris, and his family are his biggest supporters, in addition to some special people at Livingstone including Dr. State Alexander, executive assistant to the president and vice president of communications and public relations, who was always a listening ear; Dr. Da’Tarvia Parrish, a history professor, who reviewed his speeches; Shameika Stokes, social work teacher; Terri Stevenson, associate vice president of Student Affairs; and Dr. Jimmy R. Jenkins, Sr., president.

“Terrell is one of those students who took advantage of the resources afforded to him at Livingstone College,” said Alexander. “He is a paradigm for our institution’s mission in giving students a chance to succeed who might not otherwise get one. He has set a high standard of excellence in student leadership and we expect great things from him.”

Richardson will attend the University of North Carolina at Greensboro in the fall to pursue his master’s in higher education with a concentration in student affairs administration. He will work as a graduate assistant in the Office of Intercultural Engagement at UNCG.

While he has maintained focus on his studies (3.4 GPA), Richardson makes it clear some of his greatest moments at Livingstone were spent outside of his official roles and meeting individuals who will become lifelong friends.

“All I wanted was a chance,” Richardson said. “Livingstone College not only gave me that chance, but half of the class of 2018.”