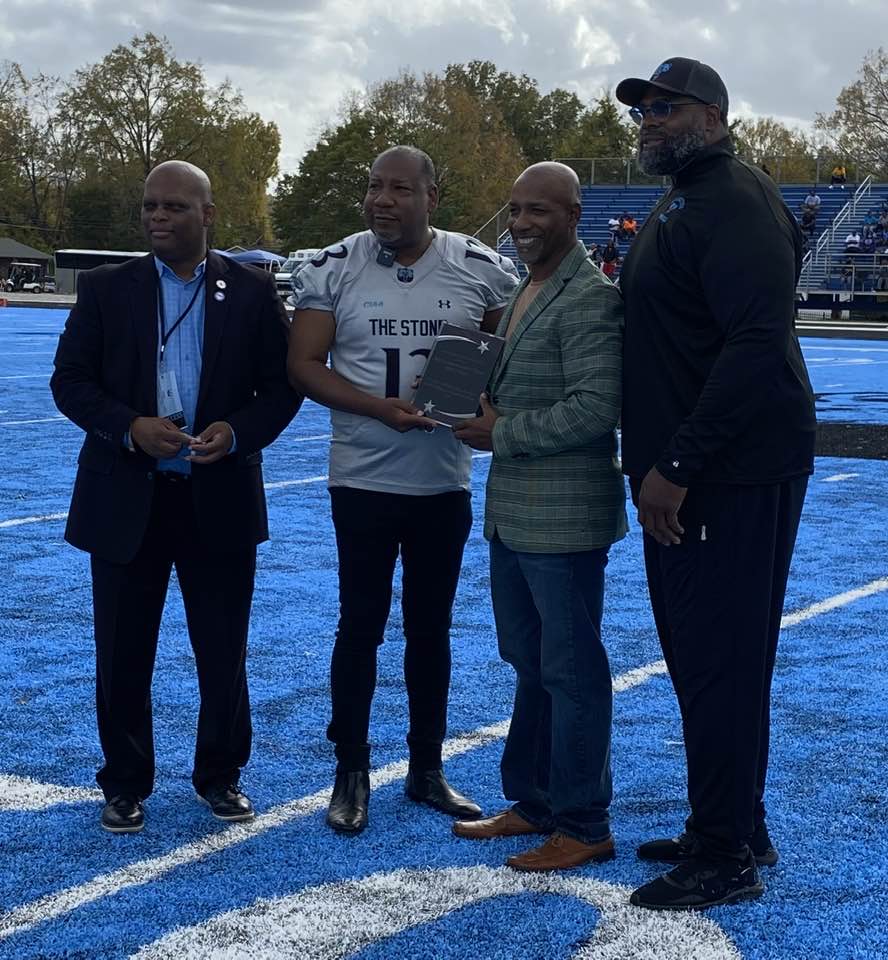 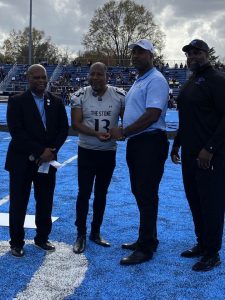 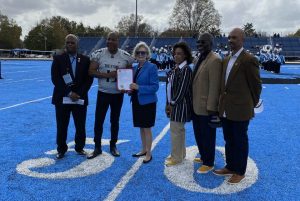 SALISBURY – In celebration of the 130th anniversary of black college football, Livingstone College inducted Rob Clodfelter into its Commemorative Classic Hall of Fame.

Clodfelter received the honor during halftime of the Commemorative Classic, hosted at Livingstone College on Nov. 5.

A 1993 alumnus of Livingstone College, Clodfelter boasted many accolades in 1992. He was voted Sheridan Broadcasting Network All-American; CIAA Offensive Player of the Year; CIAA Single Season Rushing Record at 1,425 rushing yards and rushing attempts at 282; CIAA Single Season Scoring Record at 102 points; was Jet Magazine’s Player of the Week; and received the varsity letter award for track and football.

He has dedicated his life to educating and developing students in and out of the classroom.  He and his wife, Alicia, have raised five children.

“It is always an honor to celebrate a Blue Bear for doing great things on the field and for continuing that level of excellence in their careers, as exemplified by our 2022 honoree,” said Livingstone President Dr. Anthony J. Davis. “Congratulations to Rob Clodfelter as a member of the 2022 Class of the Commemorative Classic Hall of Fame, which celebrates the 130th anniversary of black college football.”

Former NFL player Ben Coates, who played for Livingstone from 1987-1990 and who was recently inducted into the Black College Football Hall of Fame, received his Hall of Fame ring during a halftime presentation.

The five-time Pro Bowler and Patriots’ Hall of Fame Inductee played 158 NFL games and was a key contributor to the Ravens 2001 Super Bowl win.

For his induction into the Black College Football Hall of Fame and becoming one of its 96 members, Ben Coates in turn presented a grant to Livingstone football in the amount of $5,800.

In a pre-game ceremony, Salisbury Mayor Karen Alexander presented Davis with a proclamation acknowledging the Commemorative Classic as a celebration of the birthplace of black college football.