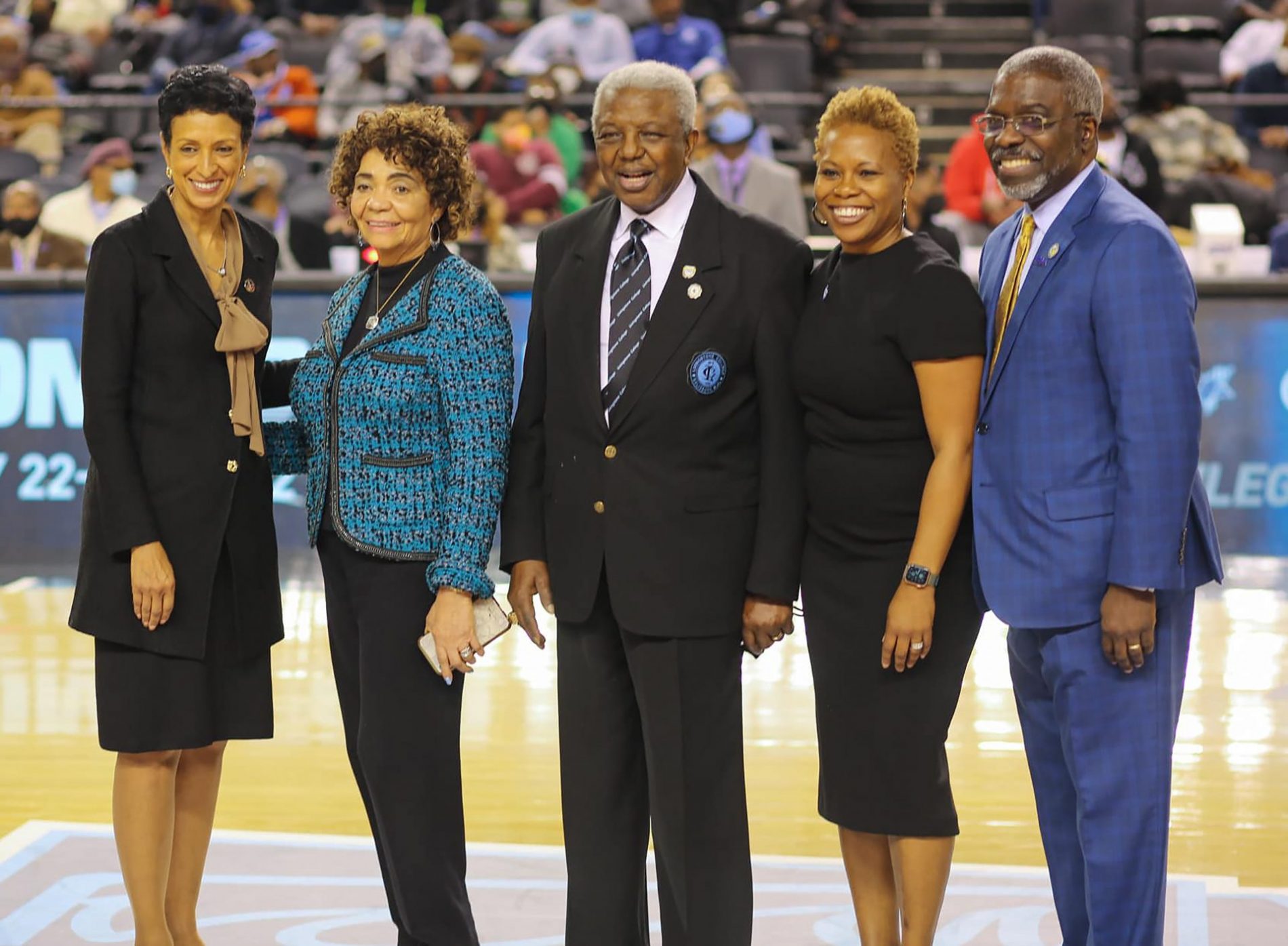 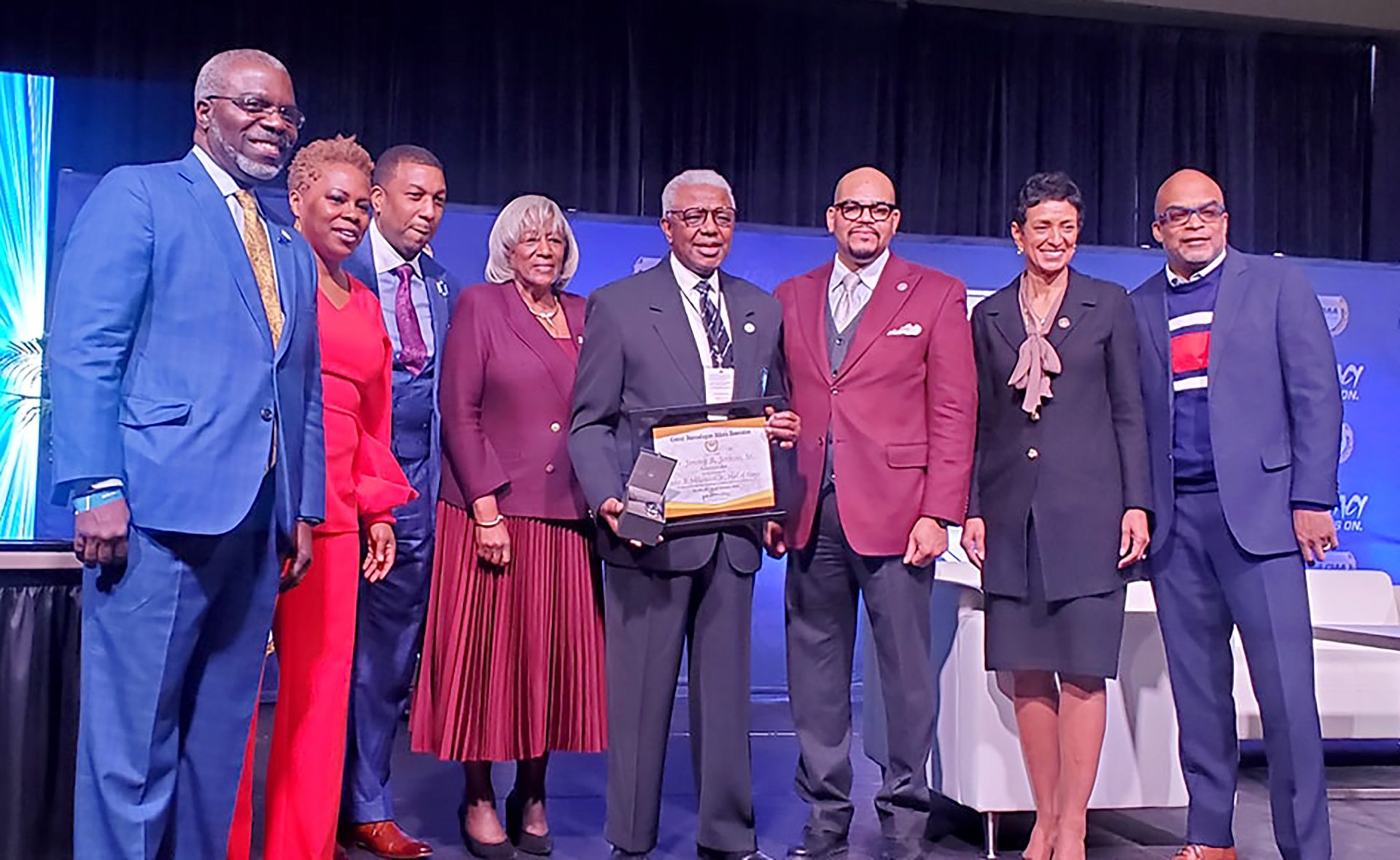 Dr. Jenkins poses with other CIAA board members after being inducted into the John B. McLendon Hall of Fame Feb. 25 at the Baltimore Convention Center. Shown second from left is CIAA Commissioner Jacqie McWilliams.

SALISBURY – Livingstone President Dr. Jimmy R. Jenkins, Sr., was inducted into the CIAA 2022 Class of the John B. McLendon Jr. Hall of Fame on Feb. 25 at the Baltimore Convention Center.

The induction was among several recognitions for the outgoing Livingstone College president, who announced his retirement two weeks prior to the Central Intercollegiate Athletic Association basketball tournament, held in Baltimore, Md., Feb. 22-26.

CIAA Commissioner Jacqie McWilliams also announced on Friday during the semi-finals that the CIAA was creating a scholarship in Jenkins’ name.

Jenkins is the longest-tenured president among the CIAA-member institutions and currently serves on the CIAA’s Board of Directors.

“I couldn’t believe it,” Jenkins recalled when McWilliams informed him he was being inducted into the Hall of Fame for his 28 years with the CIAA. The CIAA recognizes inductees for their excellence in the conference, significant contributions in the community, leadership within CIAA athletics, and commitment to the conference mission.

“When I first joined, I was the youngest member on the board. And now as I depart, I’m the oldest member on the board,” Jenkins quipped during a talk-show style interview at the induction ceremony. “And just to have my colleagues who are younger than I to see something in me to the point where they voted me into the Hall of Fame is something that I will remember and cherish for the rest of my life.”

Jenkins is credited with saving the historically black college in Salisbury from losing its accreditation and with raising its net assets value by $15 million.

“When we arrived at Salisbury, the school was on the verge of losing its accreditation with SACSCOC (Southern Association of Colleges and Schools Commission on Colleges) … We were able to move the institution to financial stability. I’m proud we were able to save the institution. Since that time, 16 years later, we’re moving forward and got reaffirmed a year ago now with no recommendations, which is historic for the institution.” There was only one other college in the nation with such a record, and it, too, was an HBCU.

The host noted that Jenkins has not one, but two buildings named after him, a distinction typically not reserved for the living. Elizabeth City State University (ECSU) in North Carolina has a science building that bears his name and Edward Waters University in Jacksonsville, Fla., named an athletic field after Jenkins. He is a past leader at both universities.

“I think its surreal,” Jenkins said, especially considering he didn’t want to go to college after graduating from high school. However, he ended up earning both his master’s and doctorate degrees in biology from Purdue University.

Being a 28-year-old black male with a Ph.D. attracted many offers, but he chose to return to his alma mater, where he could serve as a role model. He was an assistant professor for 11 years before making history by becoming the first alumnus to become chancellor there.

When asked about the future of HBCUs, Jenkin said, “We have to remember that these HBCUs were established at the time to educate the children of the just-freed slaves. This is war and it’s a war against ignorance. Many of our students are not able to perform on certain standardized tests – not because of their intellect but because of exposure. If we get that exposure, they will be able to perform well and be able to command their rightful place in the global society.”

Jenkins was joined at the induction by his wife, Dr. Faleese Moore Jenkins; their children and grandchildren; and his brother and sister.

The CIAA is the nation’s oldest historically Black athletic conference and is now touted as the third highest attended basketball tournament among all NCAA divisions.