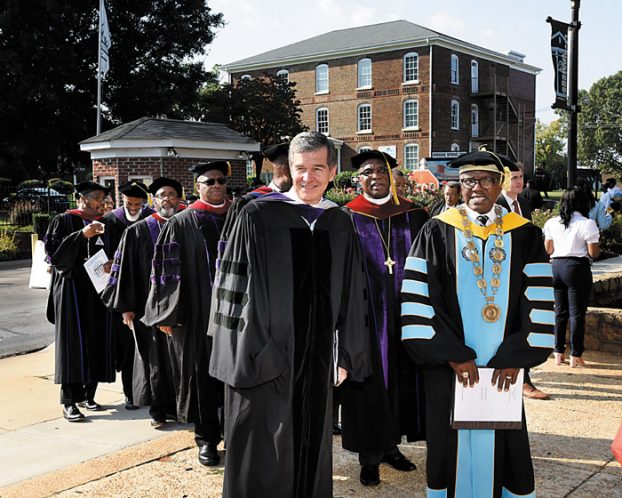 “As a people, we are all connected,” said North Carolina Gov. Roy Cooper, speaking at Livingstone College’s Fall Convocation.
Quoting Desmond Tutu, Cooper said, “None of us comes into the world fully formed. We would not know how to think, or walk, or speak, or behave as human beings unless we learned it from other human beings. We need other human beings in order to be human. I am because other people are.”
The nation is evolving into a “me-first” society, Cooper said. “We should encourage efforts to make all lives better – and that goal should be set by elected political figures.”
Fall convocation, held Sept. 22 in Varick Auditorium on campus, is the official induction ceremony of the freshman class. Cooper shared with the freshmen six points to live a life of purpose: Be involved in a cause greater than yourself; learn from lost; take the long view; read; be nice; and explore their faith.
“A faith in God can be your rock,” Cooper said. “You can be wealthy and famous, but if your only purpose is to serve yourself, you may find yourself lonely.”
Cooper grew up in Nashville, N.C., not far from the hometown of Livingstone College President Dr. Jimmy Jenkins Sr., who hails from Selma. He spent his summers working on the family farm and attended public schools. His mother was a school teacher and his father practiced law in addition to being a farmer.
Those humble beginnings laid the foundation for Cooper’s three decades in public service. He served in the North Carolina House and Senate, and spent much of his career as the state attorney general before being sworn in as governor this year.
“I want a North Carolina where people are better educated, healthier, have more money in their pockets, and an opportunity to live a more abundant and purposeful life,” he said. “I am committed to expanding health care … and making sure it’s easier for people to vote, not harder.”
Cooper became an official Blue Bear when Jenkins presented him with an honorary doctor of humane letters degree, along with Dr. Richard Rolle Jr., who is a new member of the Livingstone College Board of Trustees.
Rolle is an oral and maxillofacial surgeon in Charlotte and recently established the Dr. Richard Rolle Jr. Scholarship Program at Livingstone College. The annual $25,000 scholarship will be awarded to a Livingstone College student interested in math, science or health careers.
Another highlight of the program was a special presentation by the Women’s Home and Overseas Missionary Society (WHOMS). Vicki Breaux, the general secretary of Youth Missionary’s for the WHOMS of the A.M.E. Zion Church, spoke about the Music Legacy Project in observance of the Youth Missionary’s 105th anniversary celebrating Miss Victoria Richardson, who composed the alma mater, “My Livingstone.”
The group made a $17,500 donation to the college in order for it to purchase a Steinway piano for its music department. It is the college’s desire to become a Steinway Institution, which means all of its pianos would be Steinways.
Bishop George E. Battle Jr., chairman of the Livingstone College Board of Trustees and senior bishop of the A.M.E. Zion Church, sang Jenkins’ praises for his leadership at the college.
Jenkins has increased the value of the college more than one-third in his 12 years as president and the college owns the most valuable property in the City of Salisbury, he said.
“The Board of Trustees enable him to do whatever is good for our students and faculty to make it the best historic school,” Battle said. “Notice I said historic,” he added, noting that the school embraces diversity.
Livingstone College will celebrate the 125th anniversary of black college football during the Commemorative Classic on Nov. 4. The game will be played at 1 p.m. at Livingstone. Gov. Cooper proclaimed the September through November football season as such in the state of North Carolina.