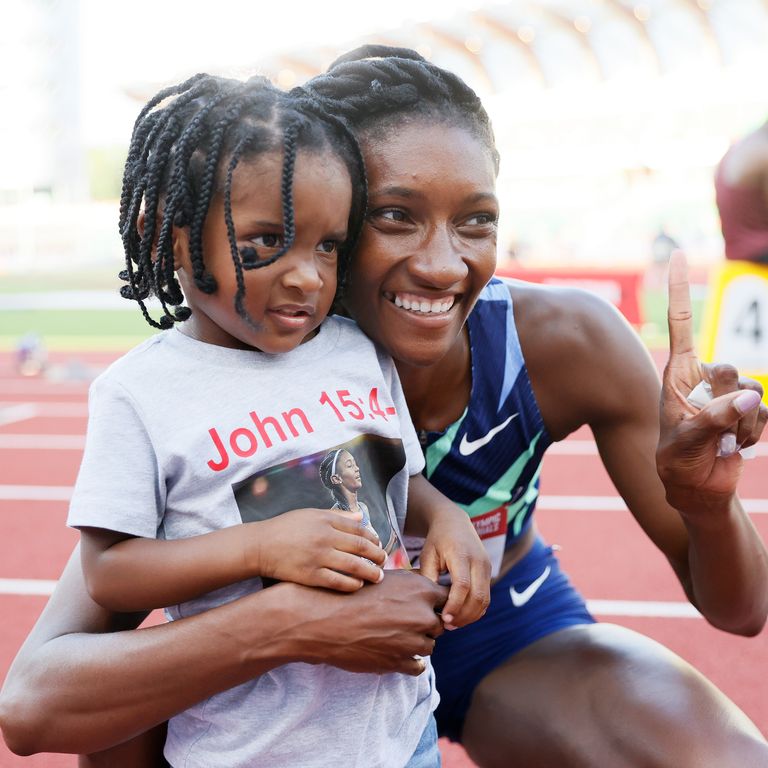 Livingstone’s Quanera Hayes is headed to the Tokyo Olympics

Livingstone alumna and track star Quanera Hayes is headed to the Tokyo Olympics after becoming the USA national champion during the Olympic Team Trials on June 20 in Oregon.

The 2015 Livingstone College graduate and Hope Mills native finished first at 49.78 seconds in the women’s 400-meter race, besting Olympics-decorated champion Allyson Felix, who came in second at 50.2 seconds, with Wadeline Jonathas rounding out the top three. All three women qualified for a spot at the Tokyo Olympics next month.

Justin Davis, track coach at Livingstone, said he was glued to the TV all weekend for the Olympic Trials, cheering on his former student-athlete.

“I have followed Quanera’s career extensively since she left Livingstone. I have always known she would make an Olympic team,” Davis said. “She has the experience because I was able to travel with her to two USA Outdoor Championships while she was a Blue Bear.”

In an interview posted by HBCU Gameday after advancing to the final round, Hayes was asked what it would mean to represent Livingstone College at the Olympics.

Davis said Hayes’ win shows that you don’t have to always go the biggest and most recognized college or university to achieve your greatness. “If you have talent, drive and motivation, you can accomplish anything you set your mind to.”

It was Davis who recruited the Grey’s Creek High School athlete in 2010. She redshirted her freshman year and competed at Livingstone from 2011 to 2015. Davis as well as Tim Dunlap, sprints coach at the time, served as her coaches.

“When I first saw Quanera, I knew that she was different because she was so far ahead of all the competition she had in high school,” Davis said.

When Hayes came to Livingstone, she was able to run against the men’s team in practice and was always right there with them, he said. Her main events were the 200 and 400 meters, but she also competed in the 100 meters, in relay and cross country.

She was a 12-time NCAA All-American – indoor and outdoor track; a four-time NCAA Outdoor Track Champion (three times in 400 meters and once in the 200 meters); an eight-time school record holder; and USTFCCCA (US Track and Field Cross Country Coaches Association) Athlete of the Year Indoor and Outdoor.

“Livingstone College is proud of Quanera Hayes and honored that she is a part of the Blue Bear family,” said Livingstone President Dr. Jimmy R. Jenkins, Sr. “She is a testament to the type of student-athletes we produce and is proof that with drive, tenacity and perseverance, success will chase you down no matter where you start running. I want to commend her for the exposure she is giving to the CIAA, to Division II schools and especially to Livingstone College, where defying the odds is our business.”

In June 2017, Hayes won the 400 meter sprint title at the U.S.A. track and field outdoor championship in Sacramento, Calif., posting the fastest time in the event in the world during that season at 49.72 seconds.

Then in August, 2017, Hayes, along with Allyson Felix, Shakima Wimbley and Phyllis Francis, represented Team USA and won the 4×400 meter at the IAAF World Championships. The team won by the largest margin of victory in world championships history – male or female – to capture the first Team USA gold medal in the event since 2011.