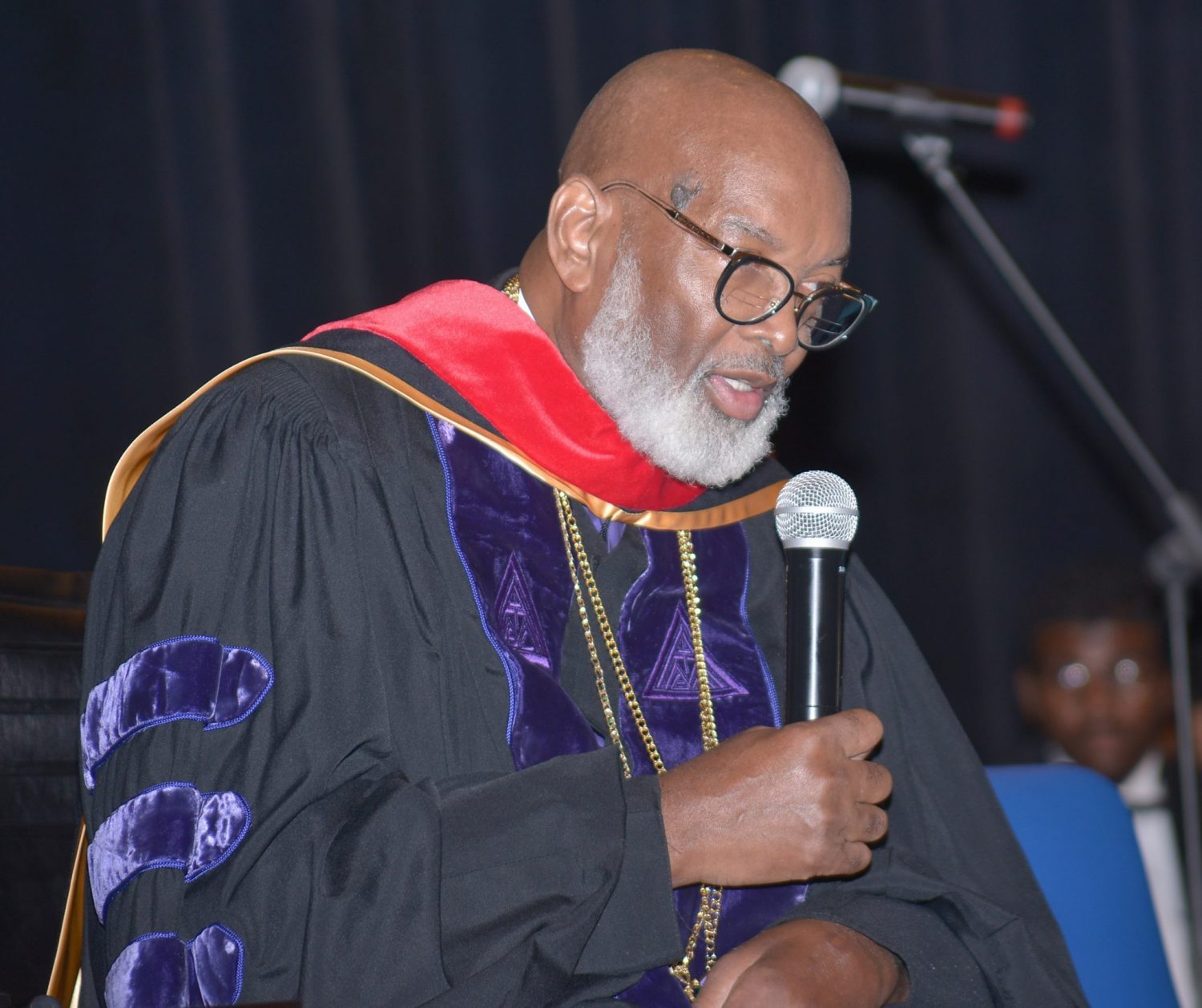 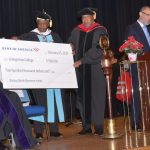 Bank of America presents a $500,000 award to Livingstone to support the Bishop Battle School of Business 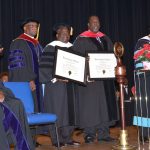 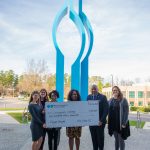 Blue Cross and Blue Shild presents $250,000 to Livingstone College at its office in Raleigh. 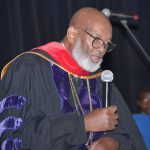 Bishop George E. Battle Jr., chairman of the Livingstone College Board of Trustees.

Battle, who is senior bishop of the AME Zion Church and a 1969 graduate of Livingstone, is nearing the end of his eight-year term as chairman of the Livingstone College Board of Trustees.

The college celebrated Battle’s leadership and distinguished service at the Feb. 6 program, where Battle’s pastor, the Rev. David A. Williams of Gethsemane AME Zion Church, was guest speaker.

The college showed a video tribute to Battle that captured his humble beginnings to his rise to bishop, as well as presented him a resolution and gavel plaque. The resolution outlined Battle’s extensive contributions to the college including, but not limited to, his generating nearly $1 million in corporate support for scholarships and academic programs; his creation of the George E. Battle Jr. Endowed Scholarship that has helped numerous students attend college; and his chairing of the Vision 2004 Capital Campaign, where the college raised more than $20 million.

His philanthropic work has made him one of the single largest contributors to the college.

“This is his (Bishop Battle) last Founder’s Day as chairman of the board and we found it fitting and proper to recognize him at this time,” said Livingstone President Dr. Jimmy R. Jenkins, Sr., who referred to him as a “giant on our campus,” one who has made a difference in the lives of those at Livingstone, in the nation and in the world.

To add punctuation to Battle’s philanthropic work, a representative of Bank of America presented a $500,000 check to Livingstone College at the program to support the up-and-coming Bishop George E. Battle Jr. School of Business, Entrepreneurship, Innovation and Technology. The college renamed its Division of Business after Battle on last year when it announced the new construction. The award will be paid over a five-year period.

Battle, who remained seated for his remarks due to his recovery from a stroke last year, gave a litany of thank-yous to Bank of America; his wife, Iris Battle; the Board of Bishops; Jenkins; and the Concert Choir.

“Growing up there were three things constant in our lives and in our home: faith, family and Livingstone,” said Battle III. “When I say this man loves Livingstone, I don’t say that as a throw away – and it didn’t just start when he was a bishop. My dad is truly my hero.”

In typical fashion, Battle’s remarks were laced with comedy. He said he planned on singing a song, but decided against it because it may make people shout. “And they won’t be shouting because I’m singing so well, they’ll be shouting because they feel sorry for me,” he joked.

He also gave a shout out to the Class of 2020 with each of them completing their assignments this year – his term ends and the seniors graduate in the spring.

Dr. Anthony Davis, Livingstone’s senior vice president of institutional advancement and chief operating officer, also announced two other contributions at Founder’s Day: $63,500 collected from the Board of Trustees, who met on Feb. 5, and $250,000 from Blue Cross and Blue Shield.

Williams, the speaker, and his wife also presented a $1,000 scholarship to Livingstone.

Three descendants of Dr. Price attended the program: great-grandchildren Phillip Sherrill, who gave remarks at the program, and Susan Price Sherrill Brantley, who spoke during the memorial ceremony, with their father Richard Sherrill.

Each year, a wreath is placed at the mausoleum in the Poets and Dreamers Garden on campus in memory of Dr. Price.